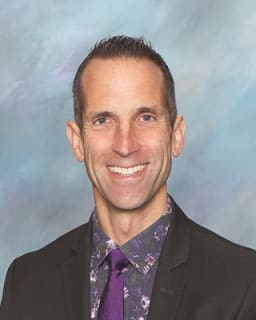 Johnny Bevacqua, President-Elect of Vancouver College, has announced the appointment of Daryl Weaver as Principal of the School, following an extensive search, which evaluated a number of qualified candidates from across Canada and the United States.  Mr. Bevacqua led the Search Committee which included members of the Board of Directors, Christian Brothers, faculty, staff, and parents.  Mr. Weaver, who is currently VC's Senior School Assistant Principal takes on this appointment on August 17, 2020.

"Mr. Weaver's proven educational leadership, innovative mindset and deeply rooted commitment to the mission and values of Vancouver College as a Catholic faith and learning community, in the tradition of Blessed Edmund Rice, will allow the school to continue to flourish and grow into our next century," said Mr. Bevacqua. "I am excited to continue working with Daryl Weaver."

Mr. Weaver is in his fourth year as VC's Senior School Assistant Principal, during which time he has earned recognition as an effective and innovative educational leader with a proven track record in program development.

While at Vancouver College, Mr. Weaver has been instrumental in creating new educational initiatives, connecting VC with worldwide partner schools, and encouraging student leadership through service opportunities. His relationships with faculty and students are rooted within the charism of Blessed Edmund Rice, and his belief that "our boys need to find Christ in the person next to them."

After graduating from St Thomas More Collegiate in Burnaby, Mr. Weaver pursued his Bachelor of Science and Bachelor Education at the University of British Columbia, gained his Masters of Education at Deakin University in Australia, and sought out additional educational opportunities at York and Queen's Universities. Mr. Weaver began his twenty-seven-year career as an educator teaching science at an all-girls Catholic school in Malawi, Central Africa, before gaining experience in both teaching and leadership positions at Southridge School, Trafalgar Castle School in Ontario, and at the Canadian International School of Hong Kong.

Mr. Weaver is the proud father to a son, who is studying Computer Engineering at UBC, and a daughter, who currently attends Little Flower Academy. He and his family are active members of St. Mary's Parish in Vancouver.

The series of changes to VC's Administration started when John Nixon, President, announced his retirement effective August 31, 2020. The Board then engaged an independent Human Resources consultant to orchestrate a sophisticated evaluation process which led the Board to appoint Johnny Bevacqua as the new President, effective September 1, 2020.  Mr. Weaver succeeds him as Principal and VC will conduct the search for a new Senior School Assistant Principal in the coming weeks.

On behalf of the faith and learning community of Vancouver College, we extend our heartfelt congratulations to Mr. Weaver in his new position.